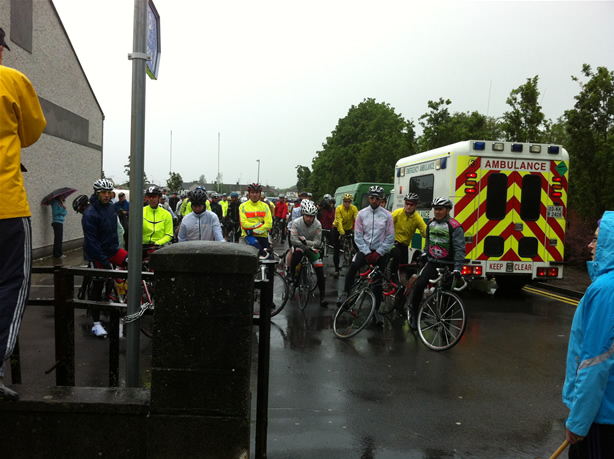 The torrential rain of the June Bank Holiday weekend greeted cyclists as they gathered in Carrick-on-Suir last weekend for The Carrick Wheelers Challenge Sportive.  The event which is billed as Ireland’s toughest sportive and is held in honour of its founder the late Bobby Power, was made all the more challenging by the heavy rain that poured down on Sunday morning.  Nonetheless, 73 brave souls took to the start line to face eight undulating challenges on a route made all the more testing by the brutal weather.

As the riders made their way through the opening challenges of Tullahought (Killkenny), the Gap of Rathclarish and Slievemon (both Tipperary), the weather saw no sign of easing, with much of the on coming traffic slowing in a disbelieving manner at the sight of such madness!

The event then made its way into the Deise County (Waterford) as the riders ascended the little known steep climb of Tigancor, before tackling the Nire Valley, where a dense fog added to the difficulty and sadly hid the beauty.  The daring cyclists then made a fast descent down from the mountain before making their way to the Rathgormuck Hiking Centre where they took a break from their efforts to enjoy a well-deserved mug of hot tea and some lunch.

Next up for the hardy participants was Carrick’s famous Seskin Hill, and with this steep climb placed over 100km into the event, big gaps were now starting to appear between the courageous competitors.  The cyclists then made their way out to the foothills of the famous Comeragh Mountain Range and embarked on the penultimate challenge of the day as they climbed the famous Mahon Falls.

This part of the Comeragh Mountains is famous on two counts, the first being the magic road, on which cars (and hopefully on this occasion cyclists) have been known to magically roll up hill, and secondly, for the beautiful Mahon Falls waterfall which flows there.

From Mahon Falls, the cyclists made there way through Kilmacthomas to Portlaw, where they entered the off-road section through the beautiful Curraghmore Estate.  This final and unique challenge again proved to be the highlight of the event for many participants as they cycled through the striking landscape where Lord Waterford resides.  The Strada Bianca / Paris Roubaix inspired challenge included some extra difficulties for the 2012 event as cyclists had to carefully avoid a raging bull enroute, not to mention a locked boundary gate that cruelly slowed some cyclists within touching distance of the finish line.  Luckily for all, the bull didn’t attack and the gate was quickly reopened! 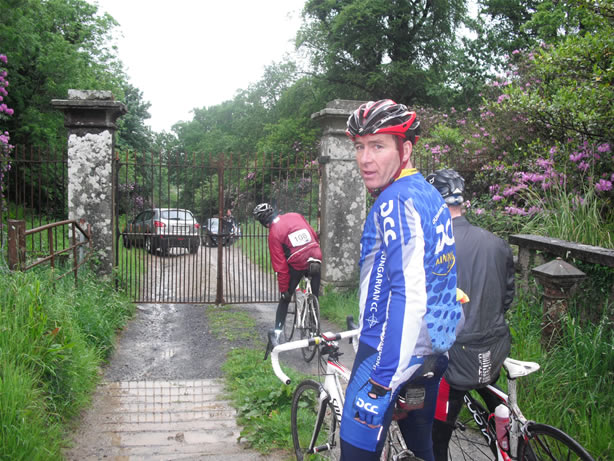 As the riders finished in Carrick-on-Suir, 160km and 6-7hours later, there was a great sense of achievement in the air as the participants smiled happily after what most people would consider a form of torture.  They had done it…they had completed the impossible…they had survived…they had enjoyed…Bobby Power’s Carrick Wheelers Challenge 2012.

This unbelievable sporting event was held in conjunction with the Carrick-on-Suir Clancy Festival and Carrick Wheelers can be proud of its success, amongst numerous June Bank Holiday weekend washouts and cancellations.

Iverk Produce Carrick Wheelers would like to thank the local Gardaí and Civil Defence for their assistance throughout the day, as well as the Swan GAA Club, Rathgormuck Hiking Centre, Super Valu Carrick-on-Suir and Lord Waterford for their support in making Bobby Power’s Carrick Wheelers Challenge Sportive a brilliant and memorable event.

For more photos of the event check out: http://www.irishcyclingphotos.com/?p=2367