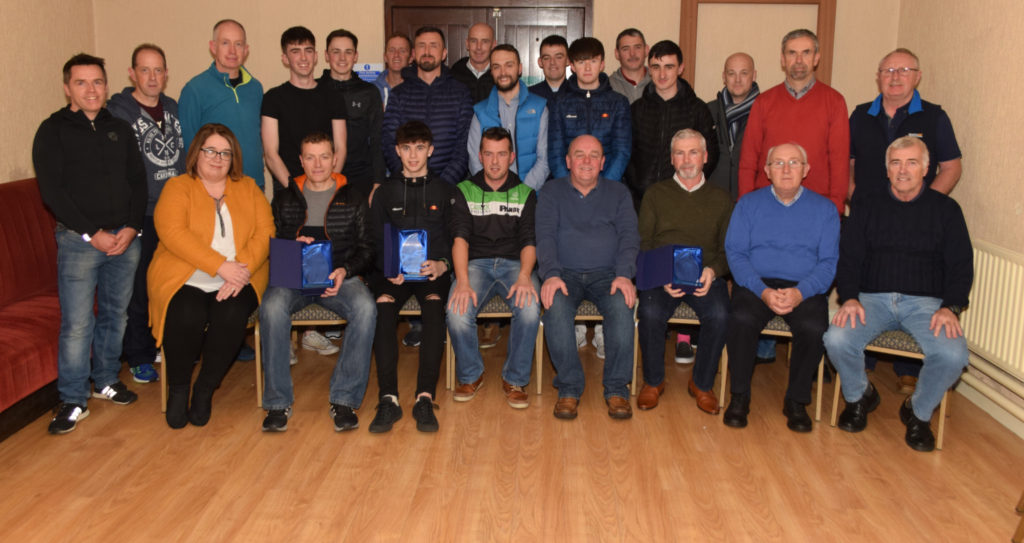 Ray Cullen, Chairman opened the meeting by welcoming the Club members present and holding a minute silence for deceased club members. Paul Lonergan, Secretary, read the minutes from the 2017 AGM with Ray following up with his Chairman’s report. He began by thanking our Sponsors, Panduit and Verge Sport for their continued support, with a special mention to John Dempsey, who recently met with our main sponsor, Panduit and secured another three year deal with them. He thanked the committee members for all of their hard work during the year. He thanked the team behind our Rás Tailteann team, Sean and Ivan Yelverton, Amanda Clifford, Paul Lonergan and everyone who helped out in any way to make the week a successful one. He also expressed the gratitude of the riders to Michael Purcell, Andrew Ahearne and Paul Lonergan who gave up their time to support the riders every weekend. He finished with a special mention to the riders themselves, from the Road Racers to the Duathletes to the Cyclocross riders. He congratulated everyone who had gotten results this year, there were too many to mention them all individually. He did however, have a special mention for Sam Bennett on his three Giro d’Italia stage wins and Michael O’Loughlin on winning the Under 23 TT Championship and his epic ride on stage three of the Tour D’Avenir.

Next up was our Secretary, Paul Lonergan’s report. Paul thanked everyone for their help with our main annual event, the Bobby Power Memorial which took place on St Patrick’s Day. He especially thanked Bobby’s wife Mags Power and their family for their help with the catering and prize-giving on the day. He went on to thank everyone who was involved with the running of our Annual Youth League especially John Kinsella, Marianne Purcell and John Coleman. He also thanked the sponsors of that event, O’Ceallachains Bar and the Tipperary Sports Partnership for their continued support. He then congratulated our Rás Tailteann team comprising of Cathal Purcell, Jamie Blanchfield, Matthew Sparrow, Daryl Kearns and Ray Cullen on their fantastic performance during that week. A special mention was given to Ray Cullen, on winning the overall prize for the A2 category. He again thanked the sponsors including Tom Murphy Car Sales, Waterford for their invaluable support. He finished up by thanking all of the photographers who turn up week after week to give us the photos to record all of those memorable moments. Following on from this, Larry Power, Treasurer, gave his report outlining all of the Income and Expenditure for the year. He reminded members that the membership fee for the coming year is now due and can be paid to any of the committee members. Thanks to Rory Wyley and Barry Lonergan for their work on auditing the club accounts.

The meeting continued with the Election of Officers. The main change here was the appointment of Club President to Billy Kennedy with Bobby Sheehan stepping down, having completed two years in the position. Next item up was the position of Vice President. This is an honorary position and is held by a few people with the addition this year of Martin O’Loughlin. Congratulations to Billy and Martin. All other officers were re-elected to their positions for another term. 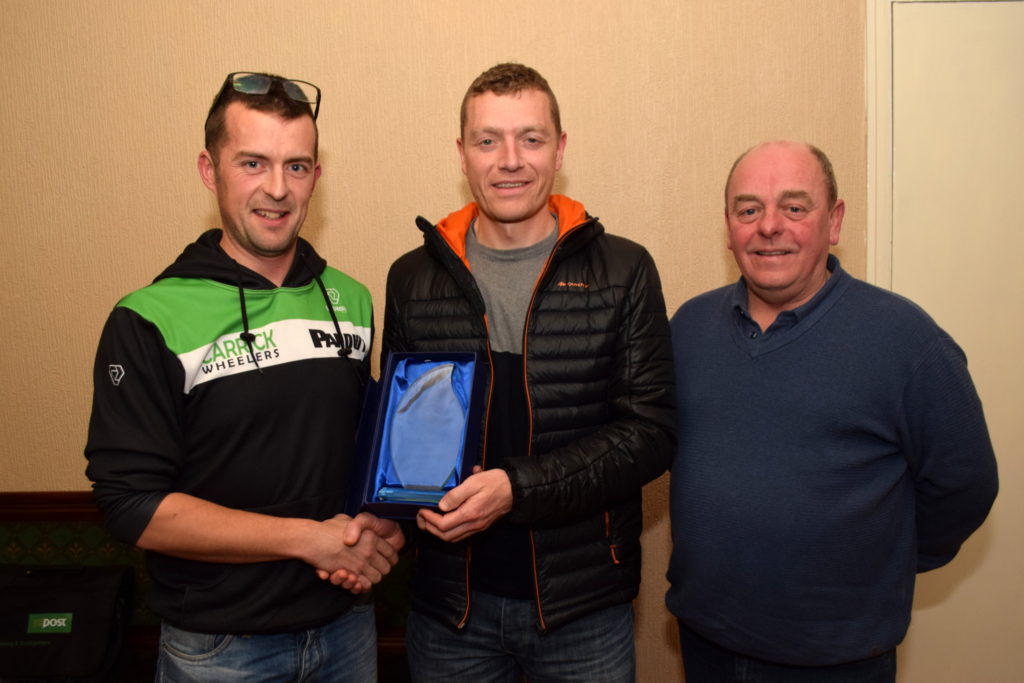 The evening finished up with the presentation of the Club Awards. The Senior Rider Award this year went to John Hodge. John was new to Panduit Carrick Wheelers this year. He rode very well all year and at the end of the season he rode the National M40 Championships where he came home in 1st place to retain the Champions jersey that he won the previous year. The Youth Rider Award went to Patrick O’Loughlin. Patrick won two National Championship medals this year, Silver in the Criterium Championships and Bronze in the Road Race. Finally, the Club Person of the Year Award went to Michael Purcell. To quote our Chairman “Michael was at more races this year than some of our riders” He gave up almost every Sunday to drive the team car to races all over Ireland in order to do support for the riders. Congratulations to each of you, you are all worthy recipients. 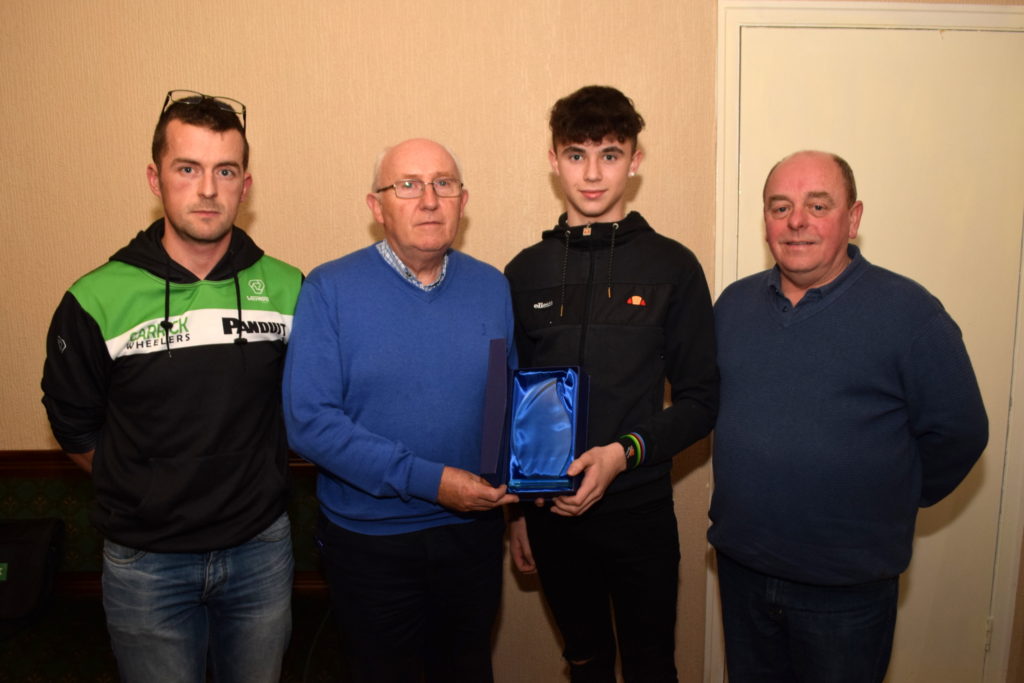 So that’s it for another year, we look forward to 2019 and expect great things from our fantastic bunch of riders, from the kids to the older lads, Road, Cyclocross and Duathlons – onwards and upwards for Panduit Carrick Wheelers CC. 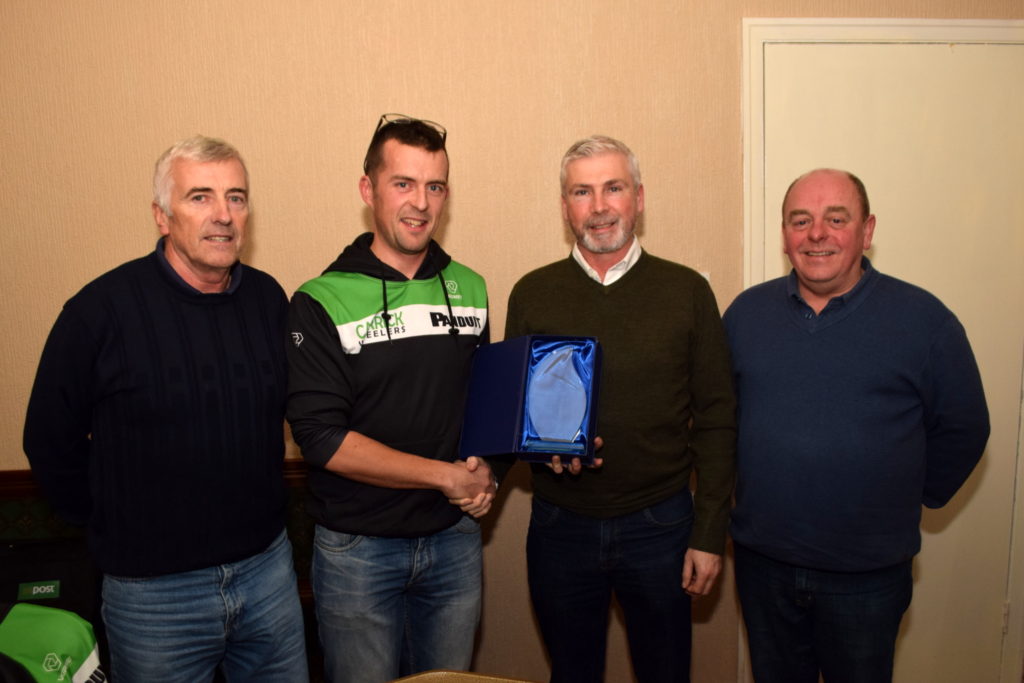