SEAMUS HEALY, Carrick Wheelers – an appreciation of his cycling life. 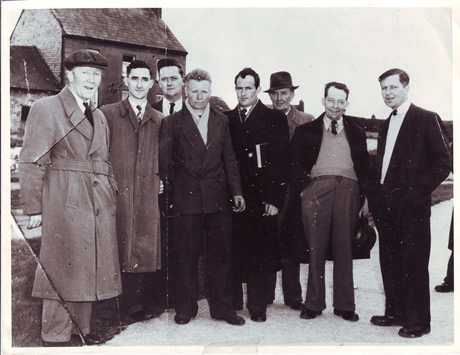 Seamus Healy, born in Carrick-on-Suir in 1932, rode his first road cycling race in 1953, and by 1957 he had emigrated to America, never to race in Ireland again. However in those intervening short few years he had a major influence on the sport of cycling in Carrick and was the first man to put Carrick on the national cycling stage.

Up until the early 1950’s, there was little or no road cycle racing in the country as the sport was mainly confined to grass track races as part of athletic sports meetings. This changed in 1953 with the promotion of the first “Rás Tailteann”, a road cycle race styled on the Tour de France. In 1954 the race really captured the imagination of the Irish public when it was contested over eight days and covered one thousand miles all around Ireland. At this time a number of cycling enthusiasts in the Carrick area, including Seamus, got together to form Carrick Wheelers Cycling Club and started to compete in races in the surrounding counties.

Through the winter of 1954 Seamus trained hard and was rewarded with some success in the races in the early part of the 1955 season. This resulted in his selection on the Tipperary team for the forthcoming Rás Tailteann, the first Carrickman to gain that distinction. In the weeks leading up to the Rás, Seamus was working as a blocklayer in Kilkenny and cycled the 50 mile round trip each day. On Saturdays he was up at dawn for some serious training and he would cycle to Dublin, which took him five to six hours. He would have his lunch at Heuston railway station and restock with food and drinks for the journey home. Then as he said himself he would “try and catch a slow truck heading south”, that is the dangerous practice of slipstreaming close behind a truck, and this would result in him “flying across the Curragh of Kildare” and knocking an hour off the journey home, as well as giving him some high speed training.  After this amazing 200 mile round trip on Saturday, he was ready for a race on the Sunday!

With all the preparation in place, Seamus was ready for his first Rás in July 1955. The Rás at that time featured very long stages, for example stage two was Newry to Sligo, a distance of over 140 miles and took almost seven hours. However it was stage seven from Cork to Wexford that Seamus was targeting as it passed through Carrick-on-Suir. As this stage was on a Saturday, there were crowds of spectators all along the route and especially in Carrick where hundreds of people turned out to see their local hero. He did not disappoint them as he sprinted into town and won the special prize for first cyclist through Carrick, though he was then passed by Kerry’s Gene Mangan who went on to win the stage and the overall race.

After that Rás Seamus went on to have many successes in local races, including a great victory in the All Ireland Junior Championship in Waterford early in 1956, but later that year decided to go and seek his fortune in America. He emigrated to New York and although he returned to Carrick early in 1957 and competed in some races, he went back to America and never raced in Ireland again. Interestingly on his trip home he brought with him a set of basketball jerseys for his friends in Carrick Wheelers, and the distinctive dark red colours with three yellow hoops became famous throughout Ireland and were the team colours for the club for the next twenty five years.

Seamus continued to cycle in America where the racing was mostly on indoor tracks, and he joined up with Belfast cyclist Tom McMullen to form a formidable two-man team, winning many races with him at tracks across America, including the famous Madison Square Garden track in New York. He later was diagnosed with a serious heart condition, and eventually he received a heart transplant in 1994. His excellent physical fitness helped him make a great recovery from what was a relatively new medical procedure, and he went on to have many years of happy cycling in America with his good friend and fellow Carrickman Teddy Power. In fact Seamus went back racing when he competed in the American Transplant Games in Florida in the year 2000, and to everyone’s amazement won the gold medal in the cycling event despite being 68 years of age!!

He always kept up to date with the news from Carrick Wheelers, and on his occasional trips home he travelled on the team bus to some races, which he greatly enjoyed. He eventually retired and returned to Carrick in 2004, and the week he arrived home coincided with a stage finish of the Rás into Carrick, where the race organisers invited him onto the podium and presented him with a memento of his win into Carrick almost fifty years previously. It was a fitting end to his involvement with cycling racing in the town and also an acknowledgement of the fact that he was Carrick’s first participant in Rás Tailteann.

Many others have followed in his wheel tracks down through the years including a certain Sean Kelly, but Seamus was the one that set Carrick on the way to becoming synonymous with cycling throughout Ireland.