Wins for Kelly and O’ Loughlin in Carrick Cabs Cup 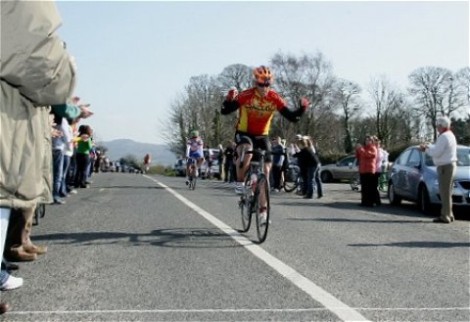 Robin Kelly of ’s Comeragh Cycling Club was the impressive winner of the Carrick Cabs Cup held in Carrick-on-Suir on St. Patricks Day, when he outsprinted his four breakaway companions at the end of great day’s racing.One hundred and forty eight riders signed for the traditional day’s racing in Carrick on St. Patrick’s Day, which was first held in 1955 and is always the first big test of the year for ’s top cyclists. Indeed some of the top Leinster also travelled, with Dublin’s Eurocycles sending their strongest team to take on strong squads from LimerickCC, Fermoy CC, Comeragh CC and of course the promoting club Dan Morrissey Carrick Wheelers. 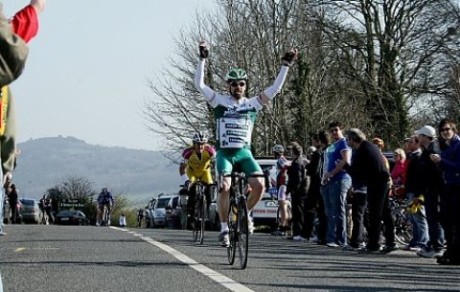 The huge field was divided into two separate races, with the 1st and 2nd category seniors first off for three laps of the usual Glenbower circuit of 21 miles, and this was followed by the support race for 3rd category seniors, veterans, juniors and ladies, also competing over three laps. Strong winds and some short but tough climbs on the route made for a good test and ensured a great day’s racing.In the main event the pace was very high from the start, with the riders reaching speeds of 40 mph on the tailwind sections and causing the bunch to fragment on many occasions. On the second lap seventeen riders opened a decisive lead on the rest and starting the last lap, they were still well clear. All of the pre-race favourites had made the front group, but the group was too big and soon the attacks started.John Dempsey of Carrick Wheelers was very prominent throughout, and again launched what was to be the decisive move approaching the Ormonde Stores with 10 miles remaining. He was quickly joined by Robin Kelly and Fermoy’s rising star Stephen Barrett. They had opened a 100 yard gap when Sam Bennett also of the promoting club sprinted across the gap with an impressive turn of speed. Last to get across to the leaders was former winner Brian Kenneally, now with Dunboyne CC, and these five quickly forged ahead of the rest.Approaching the last mile with its uphill finish, the gallant Dempsey again attacked but was closed down by the impressive Barrett. They were now on the final uphill section and Barrett led out powerfully with Bennett in prime position in his slipstream. However , with still all of 300 yards to go Robin Kelly launched a searing turn of speed and just blew the opposition away in very impressive fashion to win by all of 10 lengths. Barrett was a clear second ahead of a disappointed Bennett back in third, while a cramping Kenneally came home fourth ahead of Dempsey.The support race had a huge field of 98 riders, and the pattern of this race was very similar to the main event. This time after numerous splits in the field, seven riders emerged clear of the rest as they approached Carrick on the final lap. This group contained two national champions in their appropriate shamrock covered jerseys, veteran champion Martin O’Loughlin and ladies champion Siobhán Dervan. However as the leaders came into town it was Cian Power of the Dan Morrissey Carrick Wheelers team who sprinted ahead in what looked like a winning break.Again the final hill was decisive as Dungarvan’s  Dzintars Klava went to the front of the chasers and closed the gap on Power, whose team-mate O’Loughlin was sitting pretty in the slipstream of the Dungarvan man. O’Loughlin then launched his sprint and forged ahead all the way to the line, making it a memorable three wins in a row in this prestigious race. Conchubhar O’Crualaoch of Wexford came through to take second with Klava third, while ladies champion Dervan showed the rest the way home with an impressive fourth place.So a great day’s racing again in Carrick on St. Patrick’s Day thanks in no small way to the help of the local gardaí, the local Civil Defence, the club stewards and of course the race sponsor Liam Hanrahan of Carrick Cabs. A special word of thanks must go to the driving force behind this excellent event, Paul Lonergan of the promoting club, for his weeks of hard work leading up to the event, and yet again maintaining the club’s high standards of race promotion for the 2009 Carrick Cabs Cup.

Many thanks to John Troy for the photos.