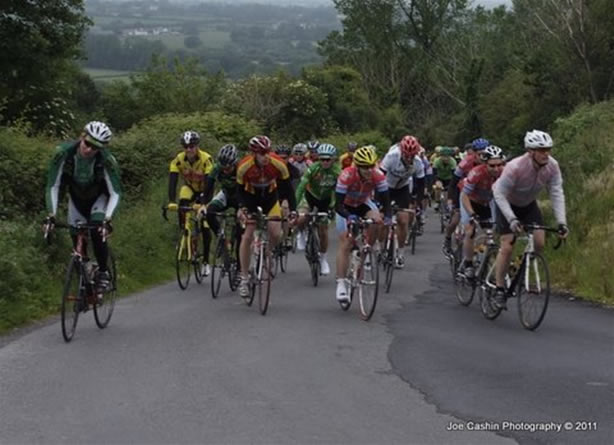 When people speak of sportives these days, they can often be heard asking each other ‘What route are you doing?’ or ‘I was hoping to do the 100km but now I think I’ll just opt for the 50km!’ Well that certainly isn’t the case for the upcoming Carrick Wheelers Challenge Sportive, which comprises of 1 Route, 8 Challenges and 160km of the toughest roads around the famous cycling town of Carrick-on-Suir.

The route which was designed by An Post Rás legend, the late Bobby Power, covers a combination of the hardest established climbs in the area including Mahon Falls and Seskin Hill, as well as the ascent of the famous Tipperary mountain of Slievenamon, before a finishing challenge on a ‘road’ through Lord Waterford’s beautiful Curraghmore Estate, that is a combination of the Strada Bianca of Italy and the cobbles of Paris-Roubaix!

This indeed is no family fun cycle and is aimed at serious cyclists with the mentality for the serious challenge that has earned the title of one of Ireland’s toughest sportives.

The route contains two food stops, the first being the principal tea stop, which will be situated just past the halfway mark, in the Rathgormuck Hiking Centre located at the foothills of the picturesque Comeragh Mountains, with a second water stop being located at around the 130km mark, manned by local Munster Time Trial Champion Hugh Mulhearne!  There will be tea and food prior to, and after the event, at the Swan GAA Hall, where the registration takes place.  And with Met Eireann forecasting warm dry summer time conditions in the region of 17°C, this third edition of one of Ireland’s Toughest Sportive is shaping up to be the most successful yet.

So are you fit enough, strong enough and determined enough to complete this monumental challenge? Well if you are, enter before this Saturday 1st June at 6pm and get ready for Bobby Power’s Carrick Wheelers Challenge Sportive.