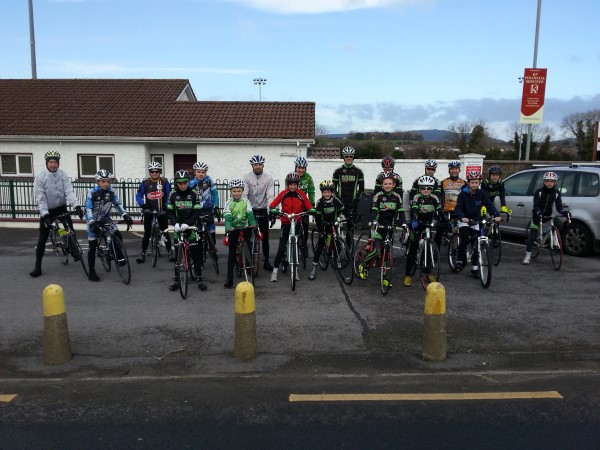 Pictured above are all those who attended on the day. Missing is Club Coach Mr. Rory Wiley.

Last Sunday, the 15th February, the future generation of Carrick Wheelers stars left their home and headed to the St. Mollerans GAA pitch, a fountain of cycling knowledge on that day. Iverk Produce Carrick Wheelers held a workshop, which covered all bases from nutrition to bike maintenance. Not only did the group of youngsters learn how to, more importantly they learned why they should. Rory Wiley shared his wealth of knowledge, collected over the years. Although he claimed not to know everything, very few would go against his word. “This is the gospel of Wiley…”

This is the second time that Carrick Wheelers have run a coaching seminar, and riders who attended previously were still heeding the information that they took in many years ago. The riders who were present last Saturday will use the tips and tricks they learned for years to come. Clubman John Kinsella’s wife Liz gave a very insightful talk on nutrition, and the importance of it for cyclists. She also taught our Conor Hennebry how to count to seven, using a bag of sugar. Sam Bennett was shown on-screen a lot, in a bid to prove that he  is indeed human, and learned all this stuff at exactly the same age as those in the room were. You could feel the goosebumps and shivering spines as he punted  “SIR BRAD” off the wheel he wanted on his way to winning his Tour of Britain stage.

Next on the agenda were the group spins. It was decided that there should be two groups on the road due the diverse gaps in age, which is never a bad thing. It shows that there are plenty of upcoming cyclists on the Carrick Wheelers conveyor belt of talent. John Kinsella led the charge on the younger group, whilst Rory Wiley took the older group under his wing. Both groups left and were back at the Molleran’s GAA grounds in approximately ninety minutes. Luckily there were no punctures or mechanicals, otherwise Rory’s powerpoint presentation on changing tubes would have been put to the test as to see who was really listening.

The club would like to heartily thank all those involved in making the day a success, including everyone who showed up to listen intently. We would like to thank Rory Wiley for running the workshop, Liz Kinsella for teaching everybody how very important what you put into your body is, “a Ferrari won’t run on diesel” as has been heard before. Last but not least we would sincerely like to thank John Maher of Mollerans GAA Club who allowed us all the use of the hall, without whom the day would not have happened. We hope that everybody left Carrickbeg with more knowledge than they came with, and will use it forevermore.