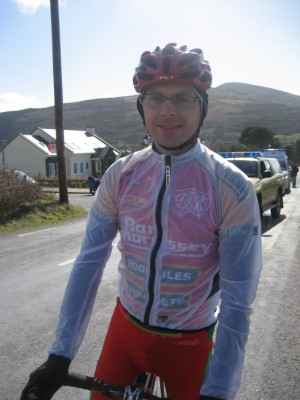 Dan Morrissey went nationwide for the easter weekend with riders representing the club in Ulster and Munster. Most notable was the seemingly unstoppable Sam Bennett who took an astonishing 5th place in the Tour of the North whilst representing the Ireland Junior team.

Meanwhile down in the Kingdom Mark Power, Joe Fenlon, John O’Brien, Michael Fitzgerald,  Diarmuid Carew, Hugh Mulhearne, Martin O’Loughlin, Rory Wyley, Michael O’Reilly and Cathal McCarthy were in action in the extremely gruelling RAS Mumhan. Thankfully the rain stayed away but the riders still had to deal with savage speeds and high winds as well as brutal but breathtaking terrain. Michael Fitzgerald was the pick of the bunch finishing in 11th overall, whilst Martin O’Loughlin had a strong ride on the mountainous 3rd stage, staying away most of the day in a small breakaway group before getting caught on one of the last category one climbs. Diarmuid Carew, who I believe is a C rider put in some very brave performances, surely one to watch in the future.