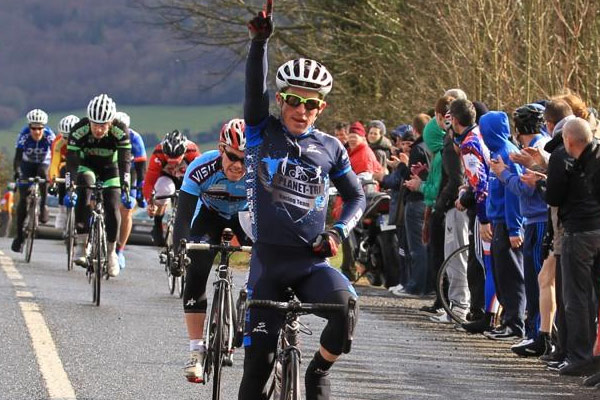 As is now tradition, Iverk Produce Carrick Wheelers Cycling Club will hold their annual Saint Patrick’s Day races on 17th March 2014.  There will be three separate races on the “Glenbower” circuit as follows:

Race HQ and sign-on is by kind permission of Carrick United FC, Coolnamuck Road (R680), Carrickbeg, Carrick-on-Suir and will be open from 0900 hours.

Start and finish is at Sir John’s Hill on the R696, approximately 1.5k from Carrick-on-Suir town centre, please allow 15 minutes to cycle from the sign-on location to the start/finish area.

Entry fee for all races is €15 and each races is limited to a field size of 150 – first come, first served!  Those wishing to ensure their participation may email Rory Wyley at rjwyley@hotmail.com detailing their name, club (if applicable) and full licence number {e.g., 14A10013 (VET)} by Friday 14th March.

Proceed on N72 for c. 10k to Kilheffernan roundabout (junction with N24), take first exit from roundabout on to N24 in direction of Carrick-on-Suir;

Bobby started in his career with Carrick Wheelers in his early teens and served the club in many capacities ranging from racing cyclist to coach to PRO to chairman.  It is probably as a racing cyclist that Bobby is best remembered, a prolific winner – Bobby won some 106 open races in Ireland, six Rás stages and finished second overall in the 1978 Rás – it is fair to say that Bobby’s name is synonymous with cycle racing throughout Ireland.  On finishing his racing days Bobby turned his attention to other facets of cycling, among them catering for the younger generation through initiatives such as the annual underage Faugheen league.

Tommy served Carrick Wheelers in many capacities and also served cycling at provincial and national level, including as President of the National Cycling Association in the 1970s.  Tommy firmly believed that no one person was bigger than the club and in the importance of catering for youth riders – Tommy started a youth league c. 1967 through which riders such as Bobby Power, Kevin Power, Larry Power, Paddy Power, Joe Cashin, Billy Kennedy etc. emerged, such foresight resulting in the club being in the happy position of celebrating its sixtieth anniversary this year, 2014.