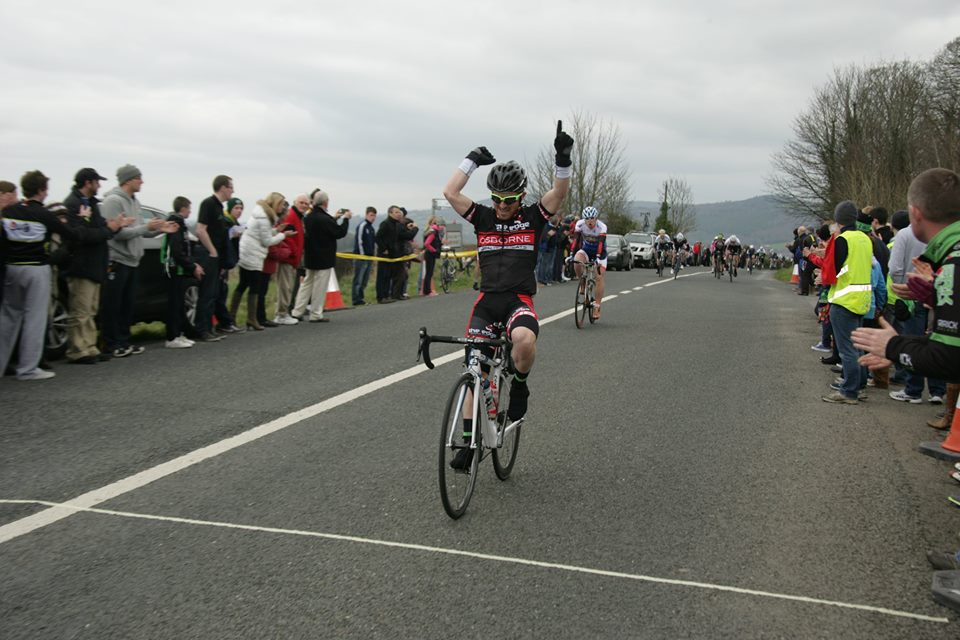 The inaugural Bobby Power Memorial race took place on the roads around Carrick-on-Suir this Saint Patrick’s Day, run by Iverk Produce Carrick Wheelers, taking in three hard laps of a 33km loop including the tough hill at Glenbower, and the leg-sapping final ascent of St. John’s Hill. The A3 Category support race also took in 3 laps of the same circuit, with the A4 race taking in two laps.

In business terms, the unique selling point of the race, and what drew the large number of cyclists to Carrick-on-Suir was that the race was affiliated with the name Bobby Power. Bobby started in his career with Carrick Wheelers in his early teens and served the club in many capacities ranging from racing cyclist to coach to PRO to chairman. Bobby won some 106 open races in Ireland, six Rás stages and finished second overall in the 1978 Rás – it is fair to say that Bobby’s name is synonymous with cycle racing throughout Ireland. The A3 race is lucky enough to bear the name of Tommy Sheehan. Tommy was a firm believer in equality throughout the ranks of the club, and in 1967, set up a youth league to encourage the development of younger talents, which is very similar to the youth league races run nowadays on a small circuit in Faugheen on summer’s evenings. The A4 event’s main prize is The Landy Cup, which is in the memory of William Landy who too believed that the key to sporting prowess was the development of youths. The handball alley at the Davin Park is just one of the fruits of William’s labours.

The A1/A2 race got underway at 11am sharp, followed in quick succession by the A3s and then the A4s. It was a beautiful day for racing, there was very little wind out on course which made for some very fast racing. The attacks came thick and fast, but under the watchful eye of Slievenamon, no breakaway was allowed to get away. After 100km of racing, the winner would be decided by who could dash up the final hill at St. John’s the fastest. For the second year in a row, the Pocket Rocket from Banteer and former An Post Sean Kelly Team professional rider Páidí O’Brien was unbeatable. Second place went to Martin Mizgajski of Barrow Wheelers CC and Anthony Doyle of Velo Revolution romped home for a fine third place.

In the A3 race however, a small breakaway of six riders looked set to joust for the spoils on the third and final ascent of the hill at St. John’s, as they had thirty seconds over the chasing bunch. But like Rocky Balboa, Iverk Produce Carrick Wheelers’ Martin O’Loughlin refused to give in, and managed to get across to the break just as they opened up their sprint for the line. O’Loughlin had the horsepower to answer their efforts though, and much to the home crowd’s enthusiasm crested the hill level pegging with the rest of the breakaway group. 100m further down the road however, it was a different story. O’Loughlin had two bike lengths to spare over Mark Gator of Waterford Racing Club in second and Dion McCarthy of Kanturk CC in third, and crossed the line hands aloft. In the A4 event, Dungarvan CC left Carrick-on-Suir with the top two steps of the podium, with John Hodge and Damian Travers notching up first and second respectively. Paul O’Reilly of Fixx Rouleurs took third in the event.

Special mention must go to Ciarán Power riding in the colours of Comeragh CC, who took Ireland’s greatest ever result in the Olympics in Cycling and former two-time winner of the Rás, who dusted off his wheels for the first time in years and rode the Bobby Power Memorial.