As is now tradition, Panduit Carrick Wheelers Cycling Club will hold their annual Saint Patrick’s Day races on 17th March 2016.  There will be three separate races, covering the various categories, on a new circuit, which takes in the townland of none other than Sean Kelly, from the start/finish line at Crehana via Mahon Bridge and Kilmacthomas village.

This year’s races are kindly sponsored by local company Morris Oil, who have a proud tradition of supporting local clubs and charities.  Morris Oil have been in business for over 60 and is delighted to come on board with Panduit Carrick Wheelers to sponsor the “Morris Oil Bobby Power Memorial Race” on March 17th.   The race circuit passes through the heart of the Morris Oil delivery area, which local drivers Tom Moroney and Michael Purcell have seen from behind the wheel of an oil truck and from cycling it over the years.
Speaking at the launch Sales and Marketing manager at Morris Oil Eoin O’Brien said “We are delighted to sponsor the renowned 17th of March cycling races with Panduit Carrick Wheelers. The circuit traverses the heart of the Morris Oil Delivery areas, and we wish the organisers a very successful event”

There will be three races as follows:

The start/finish is at Crehana on the R677 approximately 1k from the junction of the R677 and R676, the riders follow the R676 to Mahon Bridge, turn left for McGrath’s Cross, through Kilmacthomas to follow the R677 Ballydurn road to the finish.

The A1s, A2s will cover three laps for a distance of 124k with the A3s and A4s covering two laps, 83k in total, in their races.  While there is no particularly difficult climb on the circuit with 373 metres of elevation gain per lap each race should favour a strong “rouleur”.

Race HQ and sign-on is by kind permission of Carrick United FC, Coolnamuck Road (R680), Carrickbeg, Carrick-on-Suir and will be open from 0915 hours, with sign-on closing at 1015 hours.

Entry fee for all races is €15 and each race is limited to a field size of 100 – first come, first served!  Those wishing to ensure their participation may email Rory Wyley at rjwyley@hotmail.com detailing their name, club (if applicable) and full licence number {e.g., 16A10013 (VET)} by Sunday 13th March.

Details of the route can be viewed at http://www.mapmyride.com/routes/view/632245706

Bobby started in his career with Carrick Wheelers in his early teens and served the club in many capacities ranging from racing cyclist to coach to PRO to Chairman.  It is probably as a racing cyclist that Bobby is best remembered, a prolific winner – Bobby won some 106 open races in Ireland, six Rás stages and finished second overall in the 1978 Rás – it is fair to say that Bobby’s name is synonymous with cycle racing throughout Ireland.  On finishing his racing days Bobby turned his attention to other facets of cycling, among them catering for the younger generation through initiatives such as the annual Faugheen league for youths.

Tommy served Carrick Wheelers in many capacities and also served cycling at provincial and national level, including as President of the National Cycling Association in the 1970s.  He firmly believed that no one person was bigger than the club and in the importance of catering for youth riders – Tommy started a youth league c. 1967 through which riders such as Bobby Power, Kevin Power, Larry Power, Paddy Power, Joe Cashin, Billy Kennedy etc. emerged, such foresight resulting in the club continuing to prosper some sixty years later. 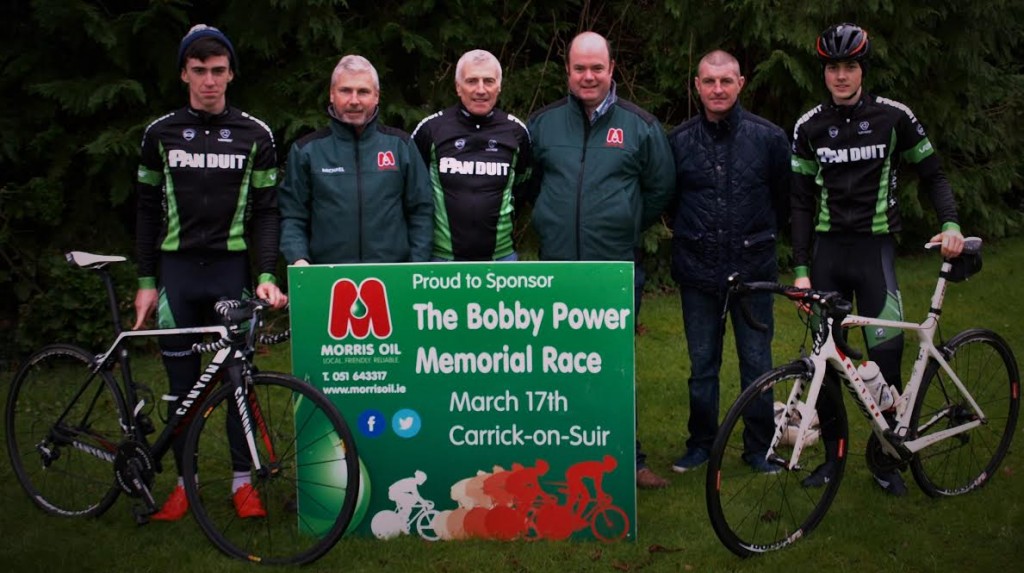