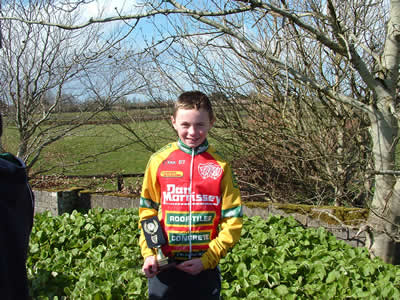 There was a total of five races contested across all grades in the annual Silver Pail Grand Prix in Fermoy on Sunday last, and with Dan Morrissey Carrick Wheelers providing three of the winners, it must go down as one of the most successful day’s racing in the clubs recent history.

The cycling calendar is structured so that in conjunction with each senior event promoted after the first of April, races for boys and girls under 12, under 14 and under 16 are held at the same venue, as well as a separate combined race for juniors, veterans and third category seniors. Carrick Wheelers have traditionally been very strong in the senior and veteran categories, and so the most satisfying aspect of last Sunday’s results is that two of the wins were in the “under age” events, and especially in Fermoy where the local club is very strong in the underage categories.

First up was the under 12 race, and these stars of the future only know one way to race and that is flat out from the start! The five mile hilly route soon had the field strung out and when the leaders came round the last bend into the long finishing straight, it was great to see two of the Dan Morrissey team colours battling out for the victory. In the final sprint for the line, Michael O’Loughlin made use of his greater experience to edge out his team-mate Dylan O’Brien and score a great one – two for the club.

The under 16 race provided a very significant win for the club with Eamonn Maher most impressive after two laps of the senior circuit totalling 24 miles. Eamonn had worked hard over the winter doing some training with the club’s senior riders, and he showed the benefits on Sunday with a stylish display throughout the race and finished it off with a spectacular sprint finish to win by a full ten lengths. Yes, it could well be the first of many wins for Emanon judging by the form he showed in Fermoy. 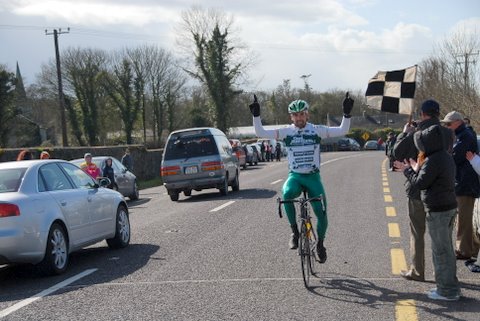 On to the senior events and here Martin made it a double for the O’Loughlin family by following his son Michael to the top step of the podium in the combined Junior, Veteran and third category senior event. Resplendent in his national veteran champion’s jersey, Martin gave another awesome display of power by crushing the opposition in this 52 mile event and coming home alone to secure his fourth victory of the season. On his current form he could be a serious challenger for the main senior events each week, but prefers to pick and choose his forays into the open races. Incidentally, Martin has been appointed as a selector for Ireland’s cycling representatives to the Beijing Olympics, so we might be seeing him in more of the open senior races in order to check out the form of the top riders from inside the bunch!

Finally in the senior race for first and second category riders, the Carrick team had to settle for third and sixth places with John O’Brien and Micheal Fitzgerald respectively, with the win on this occasion going to local hero Michael Hennessy of the promoting Fermoy CC club. This sent the local fans home happy, but undoubtedly Dan Morrissey Carrick Wheelers were the most successful club of the day with three wins from five events, and more importantly wins that auger well for the future of the club.