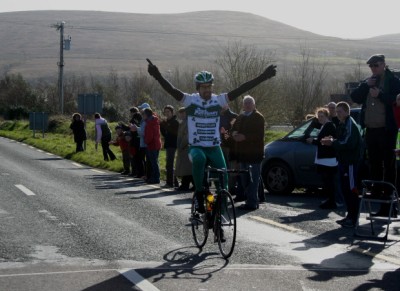 Martin O’Loughlin retained the Lacey Cup in Tralee on Sunday last in fine style. The organisers, wary of Martins win last year decided to place the veterans under 45 with the B group instead of the C group. The result was a fine afternoons racing with the B group catching the C group shortly after the village of camp. Martin, assisted ably by newly minted super-veteran colleague Rory Wyley, controlled the race well and eventually got into a break shortly after the halfway point with Keith Gater of Comeragh CC and Tom Shanahan of Limerick CC. On the final climb Martin was able to give both of them the slip to ride in on his own 15 seconds ahead.

Elsewhere there were fine performances from Diarmuid Carew who took tenth overall, whilst other Dan Morrissey riders including Kevin Shelly among others, put in a strong showing.

Photos of the prize giving on ComeraghCC.com: