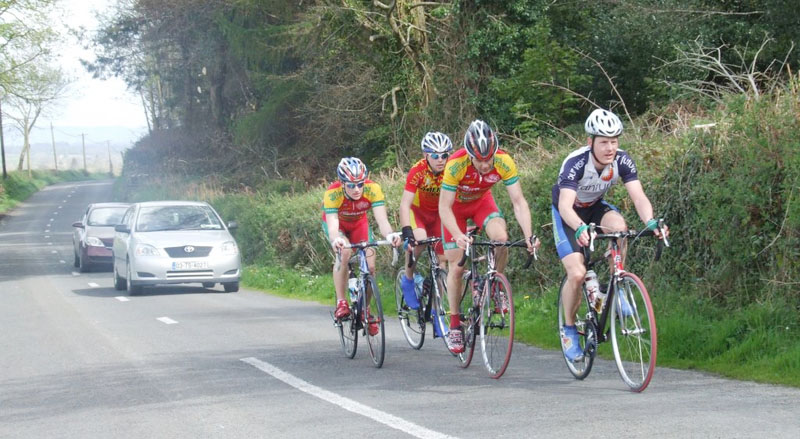 Local cycling fans have been talking about Sam Bennett for a couple of years now. A member of the famous Carrick Wheelers club in his home town of Carrick-on-Suir, his talent was obvious to anyone who saw him racing as he came up through the under- age ranks. Now in the junior ranks for the under 18 year olds, he would be acknowledged to be one of the top juniors in the country. On Sunday last, however, he moved up to another level when he won the main senior event in the Tommy Sheehan Memorial race in his native Carrick, and the manner of his victory marked him out as a real prospect for future stardom in his chosen sport.

As a member of the national junior squad, Bennett is allowed compete in some of the open senior races as preparation for international junior events, and so he got special permission to compete in last Sunday’s main senior event. The Tommy Sheehan race route is known to be one of the toughest in the country, and is ideal preparation for top senior riders for the upcoming FBD Ras. As such, it attracted a small but high class field, including professional Paul Griffin of the Giant Asia team. The race route started and finished on the Coolnamuck Road in Carrickbeg, and comprised of four laps of the Millvale, Kearney’s Road, Rathgormack, Millvale circuit, a total of 68 miles, and with five miles of tough hill climbing on each lap, the course was going to produce a worthy winner.

The three mile climb of Kearney’s road was the toughest of the climbs, and on the first lap the main bunch began to fragment as the pressure was put on at the front by the top riders. Over the top and there was eleven riders in the front group and these quickly pulled away from the rest. The promoting club Dan Morrissey Carrick Wheelers had no less than five riders in the group, with Waterford’s Comeragh club having two and the rest made up of individuals without a team-mate, including Griffin. This group worked well together until the third ascent of Kearneys, when Carrick Wheelers John O’Brien pushed the pace to see who was starting to feel the pressure.

Former France based Denis Lynch of Kanturk CC and Comeragh’s Mark Nugent quickly joined O’Brien, and when Bennett realised that Griffin was in trouble, he sprinted across to the leaders with an impressive turn of speed. After the race Griffin revealed that this lack of form on the day resulted from the five seven-hour training sessions he completed during the week in preparation for the Ras!! Up front the four pulled ahead, and had one minute thirty seconds advantage starting the last lap. As they approached the main climb for the last time, the impressive Nugent was very unlucky to puncture, and although the changed wheels and battled on, his chance to contend for victory was gone.

Now it was two to one for the Carrickmen, but on the climb Bennett left in no doubt who was the strongest rider on the day. He simply powered up Kearney’s Road, and the two senior riders were struggling to stay on his wheel and unable to share in the pacemaking. He pushed the pace all the way to the finish, O’Brien helping when he could, but Lynch only able to sit in the slipstream of the flying youngster. The three were still together with two hundred yards to go, but then Bennett unleashed a searing sprint that brought him ten lengths clear, and he crossed the line with his arms aloft in a victory salute to the acclaim of the crowd, for a memorable and well deserved victory. Lynch edged out O’Brien for second place, with the gallant Nugent next in fourth spot. With Joe Fenlon seventh, Mick Fitzgerald eight and Mark Power tenth, Carrick Wheelers had a remarkable five riders in the top ten.

Success for the club did not end there, as in the combined race for veterans , juniors and third category seniors, the team had a clean sweep of the podium places, with newcomer Cathal McCarthy having his first win ahead of Martin O’Loughlin and Rory Wyley, while in the under 16 race Eamonn Maher had his best win of the year so far and kept up his very impressive start to the season.

So a great day’s racing concluded, the rain even held off until after the prize presentations! Thanks to all who made the day such a success, particularly the local Gardai, Civil Defence and club stewards who ensured the safety of all the riders, and of course race sponsor Liam Hanrahan of Carrick Cabs without whose support races such as these could not continue.

However, the day belonged to Sam Bennett, still only seventeen years of age and able to dominate a race against some of the best senior riders in the country on one of the toughest courses in the country. The race was in memory of the late club president Tommy Sheehan, the driving force behind Carrick Wheelers for thirty years, and no one would be more pleased than Tommy to see a young man from the town coming through the ranks and showing the potential to champion cyclist in the years to come.

Meanwhile, Michael O’ Loughlin and Dylan O’ Brien competed in the Under 12 race. Michael blew the race asunder on the Fisherman’s Hill with a huge attack which saw him go clear on his own by 20 seconds at Millvale. However, a stiff crosswind slowed him over the last 2km, and he had the misfortune to be caught and passed by Kanturk’s Shane O’ Hara and Limerick’s Stephen Shanahan in the last 100m. Dylan recovered well after the hill to finish 4th.

Eamonn Maher won the under 16 race to take his third win out of 4 outings. John Skehan showed that he is improving every week by finishing 6th. Alan Ryan made his road racing debut and finished a fine 8th. Seamus Babington and newcomer Sean Donovan also rode well.

Last year, we had no rider in the under 16 race. This year, we had five. A sign of promising times ahead for our club!
(Photo on front page courtesy of Joe Cashin. Thanks Joe !)