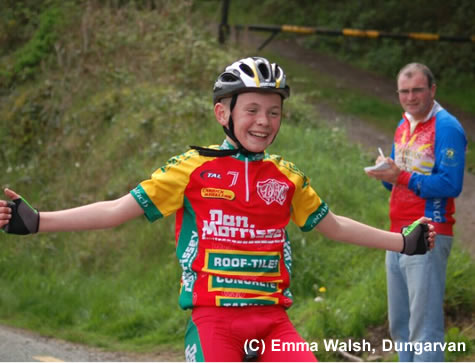 Over the past 2 weekends the club has been in action in Dungarvan and Mulingar. There have also been some strong performances in some of the local leagues. Please read on for full details.

Dan Morrissey put in a superb team performance in this event, largely controlling the race for long stretches. Eventually Rory Wyley went clear with Sean Lacey of Eurocycles, fresh back from representing Ireland in the Tour of Turkey. In the end Lacey pipped Rory for the win but it was a great day for the Dan Morrissey riders who took 4 of the top 5 positions. National Veteran Champion Martin O’Loughlin took 3rd ahead of the ever-improving Joe Fenlon (who has deservedly reclaimed his A license recently). Junior Sam Bennett rounded out the top 5.

We had a small turnout for this event on account of it clashing with the start of the RAS. However freshly minted B rider Cathal McCarthy represented the club with distinction in the main event. Cathal didn’t make it into the decisive breakaway, but every single time this reporter saw the race come around Cathal was on the front driving the pace of the chase group. Meanwhile in the combined race, which had a huge turnout of 136 riders Sean McIlroy finished very comfortably indeed in the enormous bunch sprint.

Kevin Shelly put in a remarkable performance in this race on the notorius Church Hill Circuit. Kevin went clear with Eddie Maher of Carrick Road Club after 5 miles and managed to fend off a huge field of 70 riders (including many top A riders and even professionals) until literally yards from the finish line. Martin O’Loughlin in the meantime was very unlucky to puncture early on.

Possibly dissappointed with being caught on the line in Waterford 2 nights earlier, Kevin Shelly again went clear determined to get the win. He was eventually joined by Sam Bennett who literally by all accounts just rolled off the front of the bunch with no-one able to follow. The two riders comfortably held off the bunch for Kevin to take a well deserved win whilst Sam’s second place put him back in the overall lead of the series.