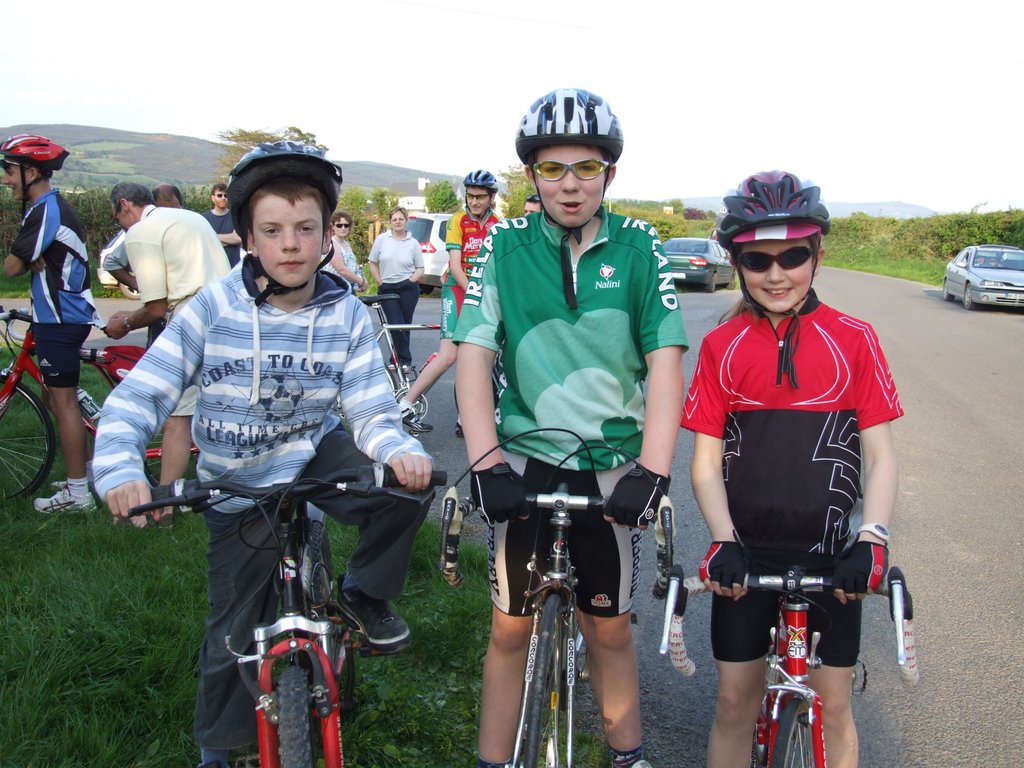 Scott Bennett followed in the wheel tracks of his older brother Sam when he won the Dan Morrissey Carrick Wheelers promoted O’Ceallacháin’s Beginners League in fine style on Monday evening last. Sam won the league when it was promoted in Seskin Wood on mountain bikes and has since gone on to bigger and better things on the road, and now Scott appears to be heading in the same direction after his great overall win in Faugheen.
The league is promoted to encourage young boys and girls in the Carrick-on-Suir area to give road cycle racing a try and also to give existing underage club members an opportunity to have a series of races locally.

With a time handicap system in operation, everyone gets a chance to win and overall success goes to the most improved rider rather than the fastest. Scott certainly did this over the course of the league, particularly in the last two races when his times improved dramatically and he scored 40 points and 38 points for finishing first and second to shoot to the top of the overall points table.
However, the glory for the final race belonged to Payton Redman, who made the long journey from Urlingford, Co. Kilkenny worthwhile by winning the final race in impressive style, when she improved by over four minutes on her previous time to come home a clear winner. Payton was followed home by Scott Bennett who picked up 38 points for his efforts, and when none of his closest rivals failed to score high points, Scott’s total of 165 points was clearly best. He finished  ahead of Richard Dunphy on 160 in second place and the previous overall leader Tomás Lacey third also on 160 points, with Richard’s fifth place in the final race to Tomás’s eight place deciding who would get second overall.
Clonmel’s Niall Dempsey was very consistent throughout the league and his 157 points gained him fourth overall, while third in the final race moved David Healy up to fifth overall on 154 points. Best of the girls overall was the excellent Kellie O’Donnell in sixth place, while the tough time handicap for the last few weeks pushed the former overall leader Michael O’Loughlin back to seventh overall. Michael ‘s result on the final race was probably due to the fact that he had travelled to Nenagh on Sunday for the Tipperary Community Games and duly won his race, so he will again represent Tipp in the National Finals. Caoimhe Kelly and Seán Hahessy rode very well throughout the league and finished joint eight overall, with John Skehan getting the final spot in the top ten on 142 points.
All of the finishers received a prize thanks to the generous sponsorship of O’Ceallacháin’s Bar and Restaurant of Main St., Carrick-on-Suir, and at the prize presentation club chairman Martin O’Loughlin thanked Neil O’Callaghan for their consistent support for the club’s underage promotions over the years. He also thanked all the club’s stewards and marshals for keeping the course safe for the cyclists and everyone who helped in any way to make the league such a success.
So all in all it was a very successful league with some newcomers and existing young members showing great potential for the future, and who knows, maybe another Sam Bennett might emerge from this group and go on to represent Ireland at international level, that’s the beauty of sport, you never know !!