Carrick based riders Jamie Blanchfield and Michael O’Loughlin have taken great results at this weekend’s National Junior Championships. Blanchfield, who lives in Clonmel has taken an unprecedented third place in the road race. O’Loughlin took  two silvers over the course of the weekend, in both the time trial and road race events. In the time trial he was beaten only by teammate Mark Downey, who is one year his senior. In the road race the winning margin was much smaller, less than 10cm at the finish line. Next man home was Jamie Blanchfield, with the ride of the day. After a season hampered by injury, he is back where he belongs and is certainly one to watch for the future. 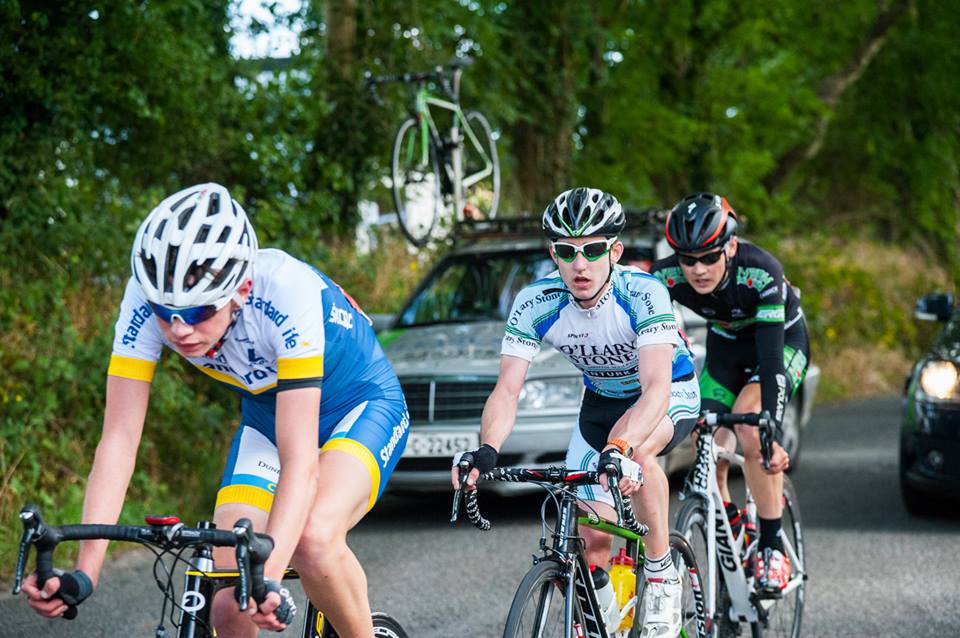 Here O’Loughlin lead the break with Dunbar and Blanchfield in tow. (Photo courtesy of John Coleman)

The road race was run over gruelling laps. Blanchfield made the break of the day, with their gap swelling to over two minutes by the third lap. However with the man that has dominated every single race he has entered so far this year, and pre race favourite, Eddie Dunbar yet to break free of the strangle hold of the bunch, the race was sure to get hotter. And it did. Dunbar broke clear, O’Loughlin with him. They both made it across to the break, and pretty much went straight by them all. Apart from Blanchfield. In the seasoned field of riders, fledgling Jamie Blanchfield took the bull by the horns and fought like a dog. The gap from the three leaders to the chasing riders went out to four and a half minutes. Barring incident, all three were guaranteed medals. The pace of the international riders O’Loughlin and Dunbar proved just too much for young Blanchfield. Just. Ahead, Dunbar did his level best to shake O’Loughlin, fearing him in the sprint he wanted to come home solo. But O’Loughlin gave as good as he got, and after an afternoon’s racing, it would come down to who is the quickest over the final 200m. Nine times out of ten, I think both riders would say that O’Loughlin would get the better of Dunbar in a drag race to the line. But Eddie Dunbar had the fire in the belly, and beat the man from Carrick with less than half a wheel to spare. Jamie Blanchfield went home with more than just a bronze medal in his jersey pocket. He also got the scalps and egos of most of the best cyclists in the country. One statistic to take away from the day is that all three podium riders are from Munster. Another statistic is that two of the three are from Carrick-on-Suir.