The weekend began on Saturday in Leinster with the Rás Naomh Finian run by Clonard Road Club in Moyvalley, Co. Kildare. The race was run over a distance of 76km starting at the Moyvalley Hotel heading out the old Galway Road, through Clonard, Kinnegad, Milltownpass, Rochfortbridge and Tyrellspass. Once they arrived in Kilbeggan, they turned around and came back to same route to the finish line in Clonard. This is one of the few races that run a separate A2 event which was good news for Ray Cullen. Having come 4th in Navan last week, he followed up with an 8th place finish here.

At the other end of the country, the Lacey Cup 2.0 was taking place in Tralee, Co. Kerry. This was a rescheduled event, having been cancelled last weekend due to snow. As it was happening on Saturday rather than the usual Sunday, the course had to be changed due to traffic. The revised route took in part of what was the course for the 2018 Kerry County Championships. It was a hard course that also included three laps of a 9km circuit in the middle of the race. There was a lot of attacking within the eight man break in the final 2km and with two Panduit Carrick Wheelers lads involved it was a nail-biting finish. At the line, Cathal Purcell had to settle for 5th place with Arminas Meskauskas in 7th place.

However, the result of the weekend came on Sunday in Rás Luimni in Caherconlish, Co. Limerick. New to Carrick Wheelers this year, Arminas Meskauskas lined out in the A1 event. After approximately 15km in, a group formed off the front and before too long they had opened up a gap of 1 minute to the bunch. They continued to work together for the next one and a half laps to stay away but then it stalled. It was at this point that Conor Hennebry of the new Dan Morrissey-MIG-Pactimo team attacked the group and got away, Arminas got on to his wheel and the two of them stayed away for the next 50km. At the 5km to go mark, Hennebry attacked again and Arminas had nothing left in the tank, after a tough day in Tralee on Saturday, to follow him. He was happy to maintain a steady pace to come over the line to take 2nd place, his best result to date. ‘Definitely an experience worth remembering’ said Arminas on what was a bitterly cold day with a mixture of hail, sleet and a small amount of sunshine thrown in.

Next weekend, sees the return of our own St. Patrick’s Day races, the Bobby Power Memorial, the Tommy Sheehan Memorial and the Landy Cup. This year’s race will be run on a 20km circuit beginning in Clonea Power, Carrick on Suir, Co. Waterford. There will be three races, the combined A1/A2 race which will see the riders complete 6 laps totalling 120km, the A3 event which will consist of 5 laps totalling 100km and finally, the A4 event, 4 laps totalling 80km. Hopefully, the weather will improve and allow us to run an exciting and safe event for everyone involved. 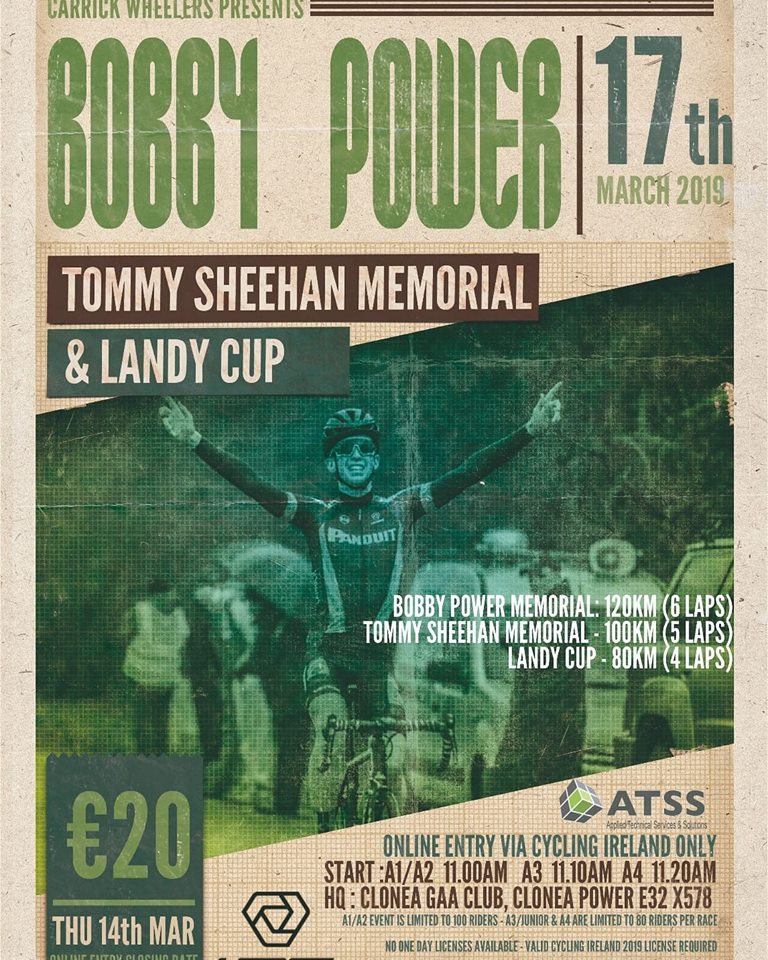